Massive scale cryptomining operations are quickly moving into the United States now that they have been completely banished from China.¹ Largely developed by private equity firms, well funded entities are scooping up decomissioned coal and natural gas power stations – not to provide energy to the grid – but instead to operate in the grey-area of “behind the meter” self service.²

There are a number of issues that must be examined in order to understand the impact of these cryptocurrency mining facilities.

But that’s only where things are right now. Use the slider to the see what just this one company projects for the near future:⁴

While this might be a nice thought, the reality is that the purchase of carbon offsets does nothing for New York. Offsets don't prevent the emission of great quantities of greenhouse gasses into New York's air, don't help agritourism, don't help the Seneca Lake fishery, don't help fight the increasing occurrence of harmful algal blooms (HABs) in lakes and streams, and don't help New York's climate leadership ambitions. In New York State, offsets are not considered when it comes to the state’s “Nation-Leading Climate Targets” as outlined in the 2019 Climate Leadership and Community Protection Act (CLCPA). The CLCPA states, “sources in the electric generation sector shall not be eligible to participate in such a mechanism [as carbon offsets]”.⁶

This is clear: With big money at stake, a concerted effort is underway in an attempt to set a precedent of allowances for Bitcoin mining facilities that pose as power plants. In 2018, Atlas Holdings LLC, owners of the Greenidge facility in Dresden, NY successfully lobbied the Andrew Cuomo Administration over permitting issues. Greenidge was ultimately permitted to operate under outdated New York State Department of Environmental Conservation (DEC) rules as a “power plant”, even though the plant is almost exclusively used “behind the meter” as a cryptomining facility – arguably making it unfit for support under the CLCPA.

Greenidge is attempting to brand itself as a leader in “environmentally responsible cryptocurrency mining.” Assuming the best of intentions, this is a malformed fantasy; but in reality is just an attempt to gaslight unwitting investors, public officials, concerned citizens, at the peril of our environment and our best interests for a sustainable future.

gallons of water per day

Facilities that generate electricity are usually situated near bodies of water for good reason. Power plants first use a combustion turbine to generate electricity, then often also use waste heat to generate additional electricity in a steam turbine. Additionally, depending on site engineering, water may be used as a coolant. At scale, this equates to an enormous amount of water drawn continuously from a natural source and cycled through the facility.

At first glance, the act of cycling water through a power station may not seem so bad. The water used by power plants is rarely tainted by any industrial processes that may be cause for concern. However, there can be repercussions with intake of cool water and discharge of warm water at scale.

The Greenidge cryptocurrency mining facility on Seneca Lake uses a lake source cooling system and is permitted to intake 139 million gallons of water, and discharge up to 134 million gallons of water back into Seneca Lake each day with temperature limits of up to 86°F in the winter and 108°F in the summer. At the current rate of operation Greenidge does not use as much water as it is permitted, yet there is concern that discharge temperatures may be contributing (along with trends in climate change) to steadily increasing rates of Harmful Algal Blooms (HABs) detected on the lake, and in particular in the Dresden Bay where the facility is located.⁷

Because Greenidge was originally designated a "power plant," the New York State Department of Environmental Conservation is repurposing old permits for water intake and discharge from when the facility was an essential component of rural electrification. But, since it is no longer operating in an essential capacity, and considering New York's climate leadership ambitions, wouldn't it make sense to assess whether current permits are appropriate?

Bitcoin's “trust-minimizing consensus” is enabled by its "proof-of-work" algorithm. New sets of transactions (blocks) are added to the blockchain by "miners.” This intensive computational activity cryptographically secures the virtual currency, approves transactions, and as a reward, creates new Bitcoins for miners as payment.

In the competition over validating blocks of transactions, miners consume an insane amount of power. The ever-expanding network of mining rigs in the Bitcoin network consume more electricity than a country the size of Sweden.⁸ Inefficient by design, over time the algorithm is adjusted by protocol to ensure that all the miners in the Bitcoin network will only produce one valid block every 10 minutes on average. As the network grows, the math that miners must complete gets increasingly difficult and computationally intensive to hash out. So much so that today only large scale operators that can afford the most efficient hashing equipment and have access to cheap energy are able to compete.⁹ Hence, the push towards repurposing outdated infrastructure for cheap, "behind the meter" energy.

Bitcoin's algorithmic inefficiency is only compounded by the fact that some 90% of the transactional volume on the blockchain is not even tied to economically meaningful transactions. Inefficient indeed.

Bitcoin's proof of work algorithm is terrible for the environment and as the blockchain grows it leads to more and more centralization of control of the network – two features that were arguably never intended by Bitcoin's original architect(s). Today, the top 10% of miners control 90% of the mining capacity and just 0.1% (about 50 miners) control close to 50% of mining capacity. This is absolutely contrary to the initial vision of crypto as a decentralized financial tool and is inherently insecure. Increased centralization opens up the network to a host of vulnerabilities. No amount of wishful thinking can fix this.

Today, in spite of Bitcoin and its big money adherents, there exist many blockchain technologies that use evolved consensus mechanisms that do not demand consolidation of social or electrical power. "Proof of stake" consensus, for example, has a comparativley tiny ecological footprint and can be decentralized to the point that once running, does not need any centralized governance, thus ensuring a more secure, more "trustless" network.¹⁰

There is an exciting future ahead with crypto, but after putting the inertia, hype, shortsightedness, and greed of the crypto-brotocracy aside, Bitcoin is not it.

In addition to its high energy consumption and massive carbon footprint, Bitcoin mining also produces huge amounts of electronic waste (e-waste). Bitcoin mining is hashed out with specialized hardware called application-specific integrated circuits (ASICs). Continuous increasing energy efficiency of newer versions of mining hardware ensures that older machines will become obsolete roughly every 1.5 years, turning efficiency into cost.¹¹ Since ASICs are engineered to do one task only, mine Bitcoin, they cannot be repurposed elsewhere, and so, they quickly go to waste.

It is estimated that the annual volume of e-waste from Bitcoin mining globally is over 30,700 metric tons, about as much waste as the Netherlands produces in a year from discarded laptops, phones, and other personal computing devices. Divided by the average number of Bitcoin transactions, this means just two transactions on the Bitcoin blockchain create as much waste as a disposed iPad.

E-waste is problematic for a number of reasons. There's a limited availability of certain resources like rare-earth metals that are used in chip production. And when electronic equipment is thrown away, toxic chemicals and heavy metals can then leak into our soil and water supply. Globally only 20% of all electronic waste is recycled, the rest makes its way to landfills, and ultimately, as toxic leachate into the environment.

The Bitcoin experiment has a terrible carbon footprint, negatively impacts fresh water ecosystems, contributes to massive amounts of e-waste, and does not scale in terms of efficiency or decentralization. In its current "proof of work" configuration Bitcoin is simply not a sustainable technology. If it wasn't for inertia, and the fact that moneyed interests have a lot riding on Bitcoin, we would have already seen the market implode.

There is a great challenge in front of communities, governments, and the environment in the form of the aggressive development of "behind the meter" cryptomining facilities out of old, previously decommissioned electric power plants. Prior to 2021, most large scale cryptomining operations were located in Asia, but now that Bitcoin has been banned in China, operations are quickly moving into the United States – and taking advantage of political discoordination and grey area regulation. Are these fossil fuel hungry facilities essential electric utilities offering "peak time" electrical service whose permitting structures should follow relatively lenient old rules? Or are they something else entirely? Now is the time to catch up.

If you find this issue concerning, please act now to prevent cryptomining from pushing any further into reality. There are a number of things you can do, most notably, contact your rep.

NOTICE: Projections are educated guesses, created by a non-scientist but working from available data and methods. The administrator of this website holds no responsibility for the projected figures contained herein. And that's the point: someone needs to take a serious look at this. 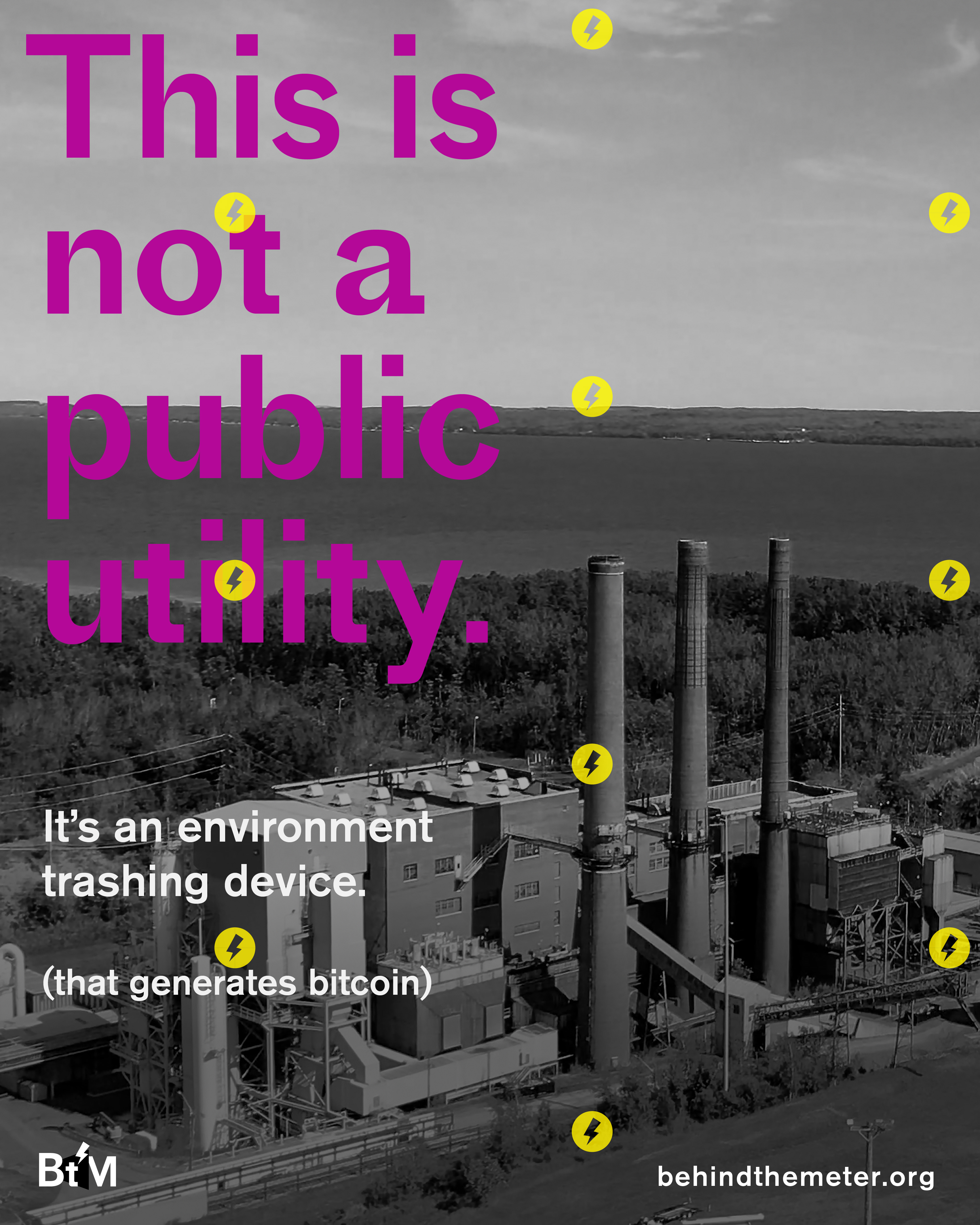